← more from
RareNoise Records
Get fresh music recommendations delivered to your inbox every Friday. 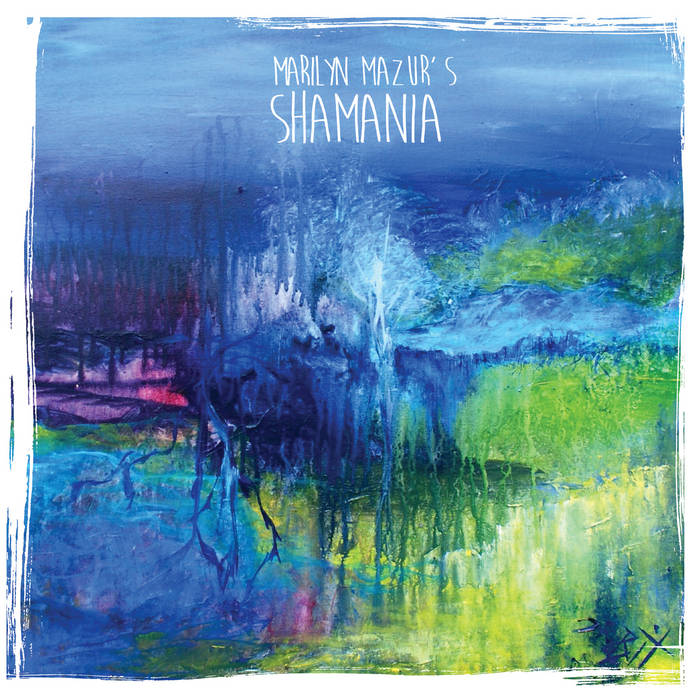 The Executioner from Turandot

In 1978, Danish percussion master Marilyn Mazur founded the bold, innovative Primi Band, an all-female music-theater ensemble that drew from a deep well of primal energy and experimental audacity. Four decades later, Mazur reinvents the core concepts in an adventurous new fashion with Shamania, a gathering of ten of Scandinavia’s most inventive and respected female musicians.

The core tenet of Shamania, as with Primi Band before it, is the Danish term urkraft – which translates roughly as “primeval power” or “primitive force.” As Mazur interprets it, urkraft represents “getting back to instinctive ways of expressing yourself. I had the vision of some kind of tribal female gathering from the past. This ritual feeling was the main idea of Primi Band and the starting vision for Shamania.”

The distinctive atmosphere that arises in both bands, Mazur explains, stems in part from the unique opportunity they provide. Most of these musicians are used to being the minority in male-dominated ensembles – Mazur herself has the distinction of being the only woman ever to have been a member of a Miles Davis group. While she’s hesitant to differentiate musicians by gender, Mazur does stress that Shamania thus tips the scale back to a more equitable position.

“It feels good to have this group to help balance out things in the world,” she says. “In the jazz world, it’s very much been men that have created the language. It’s nice to be able to be a part of creating the modern sound of jazz. I don't think you can really hear a difference -- you can hear each individual contributing their qualities to the music – but it provides a very special feeling to everyone in the band, and allows us to bring some fresh energy to the music.”

Regardless of any categorization, the ten musicians that make up Shamania are a remarkable gathering of artists, with a decades-spanning age range from 28-year-old drummer Anna Lund to Mazur, taking on elder stateswoman status at 64. Danish saxophonist Lotte Anker was an original member of Primi Band, and has since gone on to perform with such esteemed improvisers as Craig Taborn, Sylvie Courvoisier, Fred Frith, Gerald Cleaver, Ikue Mori, Marilyn Crispell, Tim Berne, and countless others.

Award-winning Swedish vocalist Josefine Cronholm and Danish percussionist Lisbeth Diers are both frequent collaborators of Mazur’s, including as part of the now-defunct quintet Percussion Paradise. Japanese-Danish keyboardist Makiko Hirabayashi has also enlisted Mazur for her own trio as well as working in several of Mazur’s other ensembles.

The remaining members of Shamania are largely new acquaintances for the veteran percussionist. Norwegian vocalist and saxophonist Sissel Vera Pettersen has brought her experimental approach to the music of composers like John Hollenbeck, Theo Bleckmann, and Chick Corea, while trumpeter Hildegunn Øiseth (also from Norway) offers the unfamiliar sound of her hand-made goat horn to Shamania’s already wide-ranging palette. Lis Wessberg is one of the leading trombonists in Denmark, where she’s played with such world-renowned artists as Randy Brecker, Ray Charles, and Kid Creole and the Coconuts.

Norwegian bassist and singer Ellen Andrea Wang blends genres in new and unprecedented ways, merging jazz and pop elements with a unique balance of the lyrical and the rough, the acoustic and the electric, creating a unique sound with her own trio as well as the critically acclaimed indie-jazz band Pixel. Swedish drummer Anna Lund is the founder of the uncategorizable indie-jazz band Hurrakel.

Live, Shamania also features the improvising dancer Tine Erica Aspaas, reinvigorating the ancient bond between music, percussion and dancing while joining the ensemble in forging new paths forward. “I’ve always been very much into dancing when I play music,” Mazur stresses. “It’s not even a conscious thing; my approach to playing is just naturally very physical and also very visual -- at least that’s what I hear from people. When people go to hear concerts they’re looking at all these musicians playing, so it really adds a lot to the music to have someone concentrate on visualizing the music with their movement.”

“New Secret” opens the album with the insistent, rhythmic chanting of an invocation. The cyclic piece is built on one of the core elements that Mazur has carried forward from Primi Band, which she calls “Primi ostinatos.” These small, repeated sonic units were inspired by the minimalist composers of the 1970s, game-changing pioneers like Philip Glass, Mike Oldfield and Steve Reich. Mazur put her own spin on that lineage, however, imbuing these repetitions with a more vigorous momentum, her rhythmic impulses in conflict with the minimalists’ inherently static compositions.

“Rytmeritual” and the later “Kalimbaprimis” are also made up of these ostinatos, in this case two variations on the same melody and repeated figures. Both pieces reveal Mazur’s deeply personal absorption and reinterpretation of diverse musical cultures and traditions, emerging with hints of Indonesian gamelan and African folk traditions. Mazur insists that these globe-spanning accents are unintentional, arising organically from her expansive tastes rather than any attempt at some kind of world music fusion.

“I listen to a lot of different music, and of course it influences me and becomes part of my subconscious musical language,” she says. “But I write more by having visions and dreams and putting them into the music. The tribal feeling of the music in Shamania might draw parallels to gamelan music, to African music, to Indian music. But it’s not a conscious choice to use those musical languages.”

“CHAAS” is one of several pieces drawn from the Primi Band repertoire. This piece takes its name from the Danish notation for the four notes of the basic melody – in English, these would be C, B natural, A, and A flat. The origins of the self-explanatory “Old Melody” may date even further back – Mazur says the tune has been around so long she can’t remember when she conceived it originally – but it has remained on the shelf until now, unused but memorable enough to emerge decades later to find its proper place in this group.

“Fragments” is a free improvisation ripple effect, with each member of the ensemble contributing a brief exclamation, which is responded to and carried forward by the next artist in line. It’s something of a functional piece on the bandstand, serving to introduce each member of the band in turn through their own musical voice. “Space Entry Dance” enjoys a similar position, its African-inspired melody used to usher the musicians and dancer onstage during live performances; here, it closes the album on a thrilling, upbeat note.

“Time Ritual” is another compositions conceived for the live stage, usually a showcase for Aspaas, with the musicians reacting in real time to the dancer’s improvised movements. In the studio, without the dancer present, it’s transformed into a sonic sculpture, built on the hypnotic rhythms of human breath.

“Crawl Out & Shine,” with its celebratory, sinuous melody, is the sole piece on the album with lyrics. It was written after Mazur won the prestigious JAZZPAR Prize in 2001, and entreats the audience to join in the band’s communal spirit, to enjoy life and music together with the musicians. “Behind Clouds” is a landscape rendered in percussion, a solo improvisation by Mazur that strives to illustrate the diverse colors of light streaming through the clouds as the sun sets over the ocean.

“Shabalasa” combines the name of Shamania with the balafon from Mali, which Mazur plays with unbridled joy. “Heartshaped Moon,” like the majority of the album, was composed specifically for Shamania, reflecting on the powers of the moon and its echo in the female cycle. Vera’s ferocious vocal improvisations, engaged in a back and forth with Diers’ tribal percussion, gives the feel of a frenzied primitive ceremony to “Surrealistic Adventure.” The two brief pieces titled “Momamajobas” were written for Mazur’s duet performance with pianist Jon Balke at the 2008 Moldejazz Festival, its name a combination of MOlde, MArilyn MAzur, and JOn BAlke. They bookend a dialogue between the percussionist and Anker called “Talk for 2.”

Shamania is the latest stunning venture in a consistently intrepid career. Since she emerged on the Danish scene in the mid 1970s with Primi Band and the fusion group Six Winds, Mazur has been an invariably original percussionist and composer. She toured the world with Miles Davis as well as the Gil Evans Orchestra and the Wayne Shorter Quintet in the 1980s, before returning to her own visionary music with the 7-piece international orchestra Future Song, then later with the Marilyn Mazur Group, Celestial Circle and Mystic Family, among other ground-breaking ensembles. At the same time she spent more than a decade touring and recording with Norwegian sax giant Jan Garbarek.

Everyone additionally sings and plays percussion

All compositions by Marilyn Mazur except :
Fragments by Shamania
Surrealistic Adventure by Mazur, Diers, Pettersen
Talk for 2 by Mazur, Anker

Bandcamp Daily  your guide to the world of Bandcamp